A Chat With The Multi-Faceted Pompi

Chaka ‘Pompi’ Nyanthando is one of Zambia’s most highly acclaimed music artists who keeps building his brand as a singer, performer, entrepreneur, founder and member of Lotahouse (other members include: Mag 44, Abel Chungu, Seya Fundafunda, Tash, Esther Chungu, Crazy Fish Band) and C.E.O. of Atmosphere Nation. His career spans over a decade and he a has made a name for himself even outside Zambia and regularly heads out for international shows when he’s not performing at home. He is backed by a dynamic, dedicated team of phenomenal singers and a skilled technical team who deliver show-stopping performances on every stage they happen to grace. As a keen lover of different sounds, his music ranges from Hip Hop to Reggae to Afro Pop to Soul and Jazz, while still delivering the message of the Gospel. As a teaser for his next anticipated yet-to-be-named album, he dropped Maganizo Pa Ndeke in September 2016. We visited Atmosphere headquarters for a chat on his thoughts on the current trends in the Zambian music industry.

M: So let start on a positive note, like what positive things are you seeing in the music industry these days? In the Zambian music industry.
Pompi: In the Zambian music industry? Uhm, positives. Positives I’d say it’s good some of the aspects of the value chain in relation to building a music career like music videos, I think they’re improving, production is definitely improving, some promoters and promotion companies are improving the quality of their service. And also the corporate integration into music sponsoring, wasn’t always the case that you get sponsorship.

… obviously CDs are what people mainly distribute but we don’t have one place you can take your CDs to that can distribute to the rest of Zambia. We’ve got Sounds that’s in Lusaka, Ndola, Kitwe and that’s it. That’s not the whole Zambia.

M: You are a giant in the music industry, what’s your opinion on the best ways to distribute music? And the most profitable ways
Pompi: I think the most profitable ways now are I think it’s caller ring tones, it think it just hasn’t been structured well here but it’s the most profitable because it’s a long term…it’s just we haven’t seen the models and it’s like they don’t want you to know that it’s very profitable but it’s extremely profitable. So it’s the most profitable but I would say it’s not necessarily functioning as it should be here but obviously CDs are what people mainly distribute but we don’t have one place you can take your CDs to that can distribute to the rest of Zambia. We’ve got Sounds that’s in Lusaka, Ndola, Kitwe and that’s it. That’s not the whole Zambia. Also in regards to CDs like Sounds, some artists have qualms because of percentages and splits and stuff like that. But I’d say the future is mobile, mobile distribution. There actually labels now in South Africa that are strictly distributing the artist’s music using caller ring tones.

M: What about online downloads?
Pompi: Online, the problem with online is because it is not the lifestyle of the average Zambian person. They don’t, I mean, if online trade was there, they would have been trading in vain. Right now you can get anything online and have it shipped in via FedEx or whatever, but it’s not in our culture to buy online I would say. So which is why ‘cause a mobile they’re on their phones, they’re on Facebook, they’ve gotten used to buying stuff with their phones, so I think that why the mobile download or that is definitely the best approach to doing things.

M: Okay. What do you know of the status of music royalties in Zambian music?
Pompi: Right now ZAMCOPS is the, I’d say, the authority in regards to copyright. But I would say that in regards to royalties and copyright it’s not as transparent, let me use that word, as it should be in regards to royalties. The reporting of downloads, ‘cause obviously royalties they work with radio play, jukeboxes and TV play. So it’s in regards to reporting, I’d say that’s where there’s a challenge, in reporting that your song got played this many times, that’s where the challenge is. There’s another aspect which has come in where they are engaging with distributors of caller ringtones companies like Spice. So instead of coming to the artist to get authority to get the tune or distribute the caller ringtone, they’re not going to the artist anymore, they’re just going to ZAMCOPS. Which is, I feel, not good. 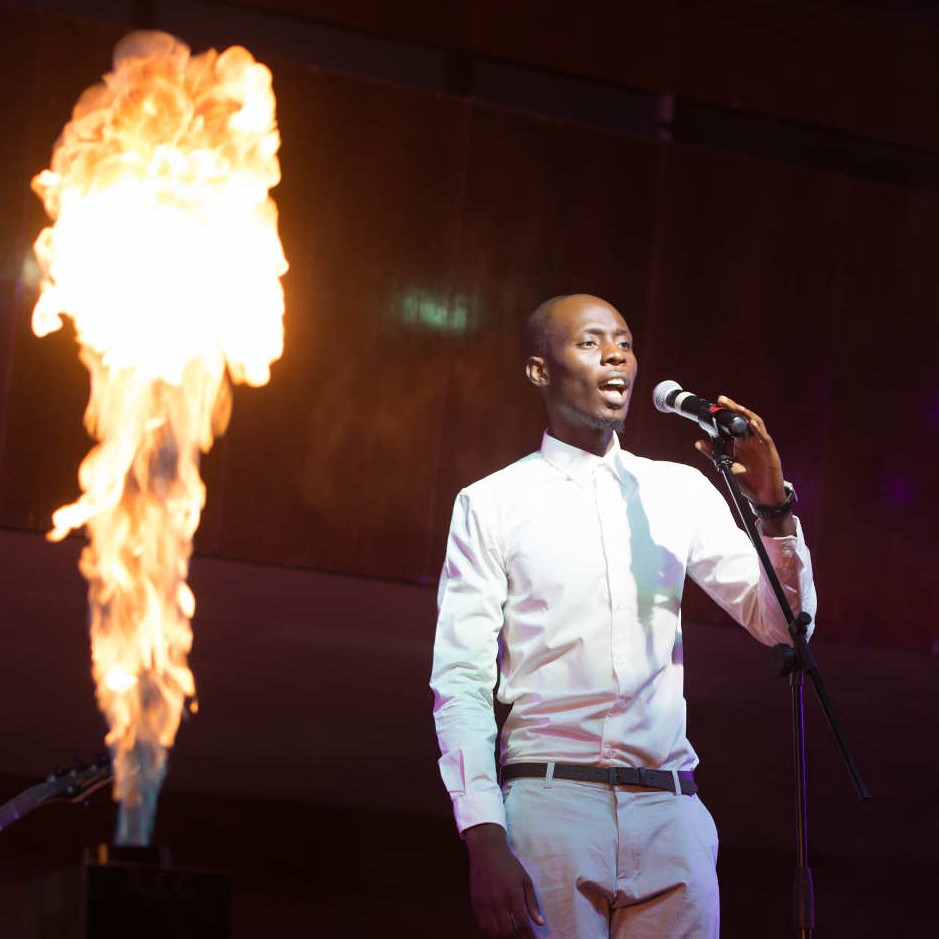 M: What are your thoughts on the significant pay-gap between international artists, specifically in the Southern (African) Region, and local artists in Zambia. Especially when we have a show here we pay the international artist more, but our local artists will probably be paid a very, very low percentage even though they are big here.
Pompi: My thoughts on that are, I would say, a profit is appreciated where they come from. I’ve sort of gotten to understand that, because it’s the same for me when I go, like, to Uganda. It’s not the same at all as here. I guess that’s how things are, so I guess, because you’re foreign…people are attracted to foreign things: foreign cars, foreign hair, foreign everything. So I guess it’s just people’s value systems. I guess it’s not the promoter’s fault, ‘cause it’s the people who value these artists more than they value local artists. The numbers won’t be showing up there to see local artists, in let’s say a stadium. They’ll be there to see the international artists, and the international artist knows that. The promoters also ask the artist how much they charge, so it also comes down to the artists to create their worth, to build their brand to a place where it’s tough for even an international artist to come, like some Nigerian and South African artists. So it’s up to us to value ourselves. If you leave someone else to value you, then they’ll obviously undervalue you. It shouldn’t be that when the international artists comes, that’s when you hike up your hiring charge to whatever amount. It should have been that amount consistently, rather than for a particular event.

The promoters also ask the artist how much they charge, so it also comes down to the artists to create their worth, to build their brand to a place where it’s tough for even an international artist to come

M: So artists should create a package for themselves.
Pompi: Yeah. And be consistent with that package.

M: How often are you performing?
Pompi: I’d say on average, once every week.

M: In places like?
Pompi: In churches, a lot of corporate events, a lot of weddings, although I’m not doing weddings anymore, I love to go to youth events where we sing and talk to the kids. Not all of them are paid. Some of them we do just because we love what we do.

M: Would you want to be performing more?
Pompi: Definitely. Definitely. One of the things that has been the problem is that my performances have mainly been in Lusaka and the Copperbelt. I’ve never been to Chipata, I’ve never been to Kabwe, I’ve never been to Mazabuka. It’s just Lusaka, Copperbelt, Lusaka, Copperbelt. I’d love to travel to other places. As an artist you could be doing a circle or rotation around the country. You release an album, and you go round, you release another album and you go round. But right now it’s like you release an album, you have an album launch and that’s it. You have done your ‘tour’ and that’s your ‘tour’. But it would be nice that after your launch, you go to Ndola, you go to Chipata, and yeah.

M: What’s preventing you from going to other parts?
Pompi: I would say venues. Obviously ‘cause it’s more Gospel, I’d say it’s easier for secular artists because of the nightclubs. The night-club promoters will call them for an event. For Gospel concerts there are churches, but sometime the acoustics in the church (are a problem). And also the principle: My principle, when I’m doing my music, I don’t like calling people to a church ‘cause I feel like it’s not inclusive to people who are not believers. My genre of music would be Hip Hop, my message is the Gospel, and I feel that people should feel included. The message in the music is mine to choose and shouldn’t be categorised based on like I’m part of a club or exclusive to a certain place.

M: Do you manage yourself?
Pompi: No, I don’t. There’s a team: Seya is the Operations Manager, Evan’s Broadcasting Manager, Sam is Technical Manager, who are permanent and come to the office everyday. I have three sound engineers, Jonah, Joshua and Ian, there’s the stage manager, the Floor Manager who is Angel, there’s the Access Control Manager who is Mainza and Logistics Manager is Kwenda.

M: Have you ever managed yourself?
Pompi: I have, for very short periods of time, but I’ve always had someone, but not in the full sense of management. Artist management is very involving. I wouldn’t even define is as management, I’d maybe consider it as admin. Because management is like strategic thinking. The problem is the intellectuals, the people who would do artist management are stolen by banks and all these serious corporates. None of the intellectuals or people who are really good with that strategic thinking want to involve themselves with music, so it’s been very difficult to find a manager.

M: What was the most memorable moment of your career?
Pompi: I would say the first time I went to Uganda for, no, the second time I went to Uganda for an event called PHAT Fest. And I would say why it was a memorable moment was ‘cause it made me understand the power of music and the Internet has become powerful at making it easier to be a musician. I think it’s easier to be a musician now than it was back then because now really it’s about your content, it’s not about all these huge platforms and industry structures. Really, if you’ve got content, they’ll find you. I was just intrigued that I could go to Uganda and people know my lyrics. I couldn’t believe it, there were so many people there. The music videos, they would get them off YouTube and play it on the national TV. So yeah, I just found that amazing, and it made me think that ‘This is awesome, I’m not restricted to Zambia’, so it sort of broadened my reach, the way I want to reach with my music.